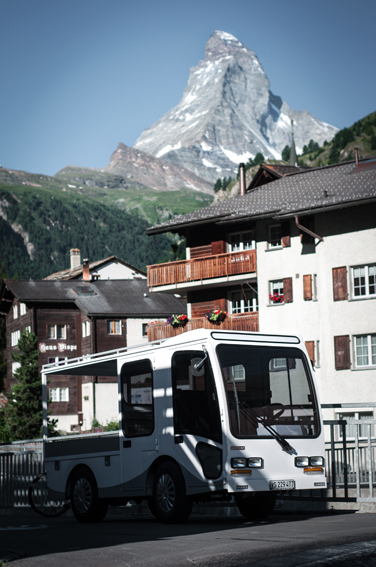 It all looks a bit like The Truman Show. Like yet another tourist attraction. Watching the traffic, you get the impression of a somewhat chaotic but well-directed performance. There are about five hundred small battery-powered cars and buses here. They drive silently along the narrow streets, delivering goods and shuttling tourists and locals around town. They work, even though they look like something out of a cartoon.

No combustion engine vehicles are allowed in Zermatt. In fact, this Swiss municipality has been free of cars for most of its history. The road linking St. Niklaus and Zermatt was closed to automobiles in 1931. Thirty years later, citizens voted to uphold the ban. Instead, there’s something like a park and ride facility. Visitors to Zermatt have to leave their cars in Täsch, five kilometers downhill, and transfer to a train that runs every twenty minutes. Though there are signs in several languages posted along the road, drivers will occasionally drive through, blindly following their GPS, undeterred by the stares of hundreds of laughing pedestrians, and attempt to pull up to their hotels. But there’s a pretty steep price to pay for that luxury.

The first electric cars appeared in Zermatt in 1947, but the 1970s marked a watershed for the town. Most of the vehicles on the streets here today have been manufactured by a local company called Stimbo. Since 1996, all of Zermatt’s cars have been made of aluminum: they’re lighter, use less electricity, and are resistant to corrosion. That’s a big benefit in a place with long, snowy, frosty winters. To be deemed roadworthy, the cars have to meet certain standards. They can’t be more than two meters tall or four meters in length (buses are exempt). They also can’t look too futuristic or resemble traditional automobiles. 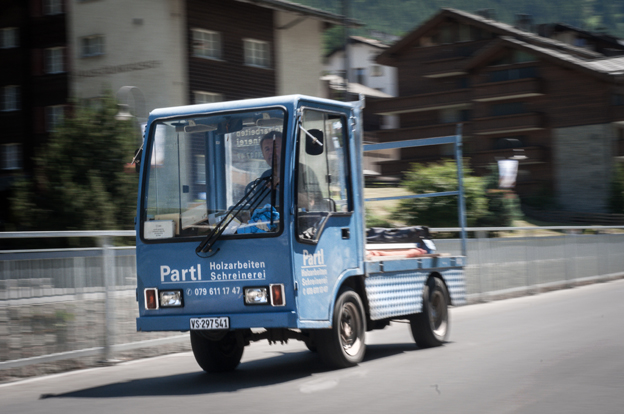 Nowadays, the cars come factory-installed with a governor and won’t go any faster than 20 kph, even downhill: that’s the speed limit in Zermatt. Older models – vehicles from as early as the 1970s are still in use – don’t have these regulators, and can sometimes pick up too much speed. Perhaps that’s why the local police have bought a special mobile speed trap. Or perhaps it’s because every year in the spring and fall, for four weeks, normal trucks are allowed to enter Zermatt to help with construction work.

You can’t just walk into a dealership and buy an electric vehicle. Or at least not for personal use. If every citizen of Zermatt were to drive their own car, the roads would quickly become gridlocked. Automobile ownership is thus limited to businesses such as hotels, restaurants and stores. The registration process is also strict. Another big hurdle, even by local standards, is the price. These aluminum knick-knacks cost anywhere from 65,000 to 90,000 Swiss francs. For everyone else, there are bicycles, taxis, and buses. Or you can always go on foot.

Though the inhabitants of Zermatt have managed to keep their town free of smog, there’s nothing they can do about sand blowing in from the Sahara. If weather conditions are just right, it can travel all the way from Algeria to Swit- zerland in two to four days. The sand settles on the glaciers, washes down with the rain, and can be spotted on cars, streets, and houses. This phenomenon has been observed for two thousand years, but it’s more of a curiosity than an actual problem here. It does, however, illustrate the fact that even a tiny green enclave like Zermatt is still part of the global ecosystem.

But for it to stay green, local action is necessary. That’s why the citizens of the town look after their surroundings. Everyone sorts and recycles their waste, and Zermatt even has its own sewage treatment plant. Expanding the village, installing new ski lifts, and building more restaurants and chalets is all done with sustainable development in mind. The local government and lift owners spend sizable sums on protecting nature and monitoring the environmental impact of the growing infrastructure, much of which is being built for skiers. Energy-efficient buildings are popping up, and the restaurant located at Europe’s highest cable car station atop Klein Matterhorn (3,883 m) is fully powered by solar panels. The question of whether lifts should even be built in such places is a separate and unresolvable matter. Though they constitute an enormous encroachment into nature and the landscape, cable cars offer many people their only chance to see the area from that vantage point.

Zermatt lies at the end of a deep alpine valley at an altitude of 1,600 m. Though it’s formally a village, the word certainly doesn’t do it any justice. Through its center runs the river Visp, whose banks are dotted with benches and even wooden deck chairs. The town’s leisurely pace and tourist enclave ambiance make the passing time feel irrelevant, inviting you to relax and just wander around its narrow streets. A majority of the buildings house hotels and pen- sions – it’s almost as if there were no normal homes in town. All of them are similar in style and well kept, with mowed lawns and flowers in the windows. Though so many of these houses have been packed into a small area, they form a cohesive whole.

But the most interesting part of Zermatt is its oldest area, Hinterdorf, home to around thirty traditional-style wooden buildings, among them old homes, warehouses, stables, and barns. A few of them may be up to five hundred years old; most were built between the 16th and 18th centuries. They’ve survived this long thanks to the resin-rich and pest-resistant larch wood used in their construction. Some of the houses stand on flat stone slabs balanced on wooden posts, a design that was intended to keep out mice. Another characteristic feature of these buildings is their stone roofs. But take a few steps out of this time capsule and you’ll find yourself in the middle of bustling Bahnhofstrasse, Zer- matt’s main street, which stretches from the train station to the local Catholic church and the main square, beneath which is an underground museum. The foot traffic here is pretty heavy: throngs of tourists flock to the town to enjoy its atmosphere, ride the cable cars and ski the miles of trails on the nearby slopes, and to dine in Zermatt’s many restaurants, which serve everything from regional fare to Japanese cuisine.

On one side of the valley, among the many snow-capped peaks, rises the majestic and untamed Weisshorn (4,505 m) with its characteristic long ridge. The other side is dominated by the Monte Rosa massif, the greatest cluster of four-thousanders in the Alps, as well as the much smaller but very popular Gornergrat. The summit is famed for its majestic views of the neighboring peaks and is home to Europe’s highest rack railway station (3,089 m). The railway was completed in 1898, but it remains one of Zermatt’s top tourist attrac- tions. The half-hour trip takes passengers on an exhilarating ride over bridges and through tunnels bored into the rock. The occasional unplanned stop makes the whole affair even more breath-taking. At moments like these, there’s only one way to calm down: just tell yourself that the brakes are fine and the train will be on its way in a moment – this is Switzerland, after all. The view from the nearby peak of Rothorn is equally beautiful. This three-thousander is accessible by cable car. The panorama is even broader, and offers an excellent view of the most important summit in the area: Matterhorn (4,478), which stands at the end of the valley, looming over nearby Zermatt. The impressive, hypnotic mountain is one of the symbols of Switzerland and is the seventh highest alpine four-thousander. Seen from this perspective and from Zermatt itself, it’s a nearly perfect, archetypal peak: isolated, soaring and triangular, like in a child’s drawing. Some come here just to see it with their own eyes. Others, unsatisfied with merely looking at it, want to see the view from it.

One of those people was Edward Whymper, an Englishman who first visited the Alps in 1860 to make a series of woodcuts. Though he had never had any interest in the mountains before the age of twenty, his mind and imagination became utterly captivated by the Matterhorn. He grew obsessed with the desire to perform the first ascent of this stone pyramid. Whymper wasn’t even deterred by the words of the respected naturalist Horace-Bénédict de Saussure, considered the founder of alpinism, who, having conducted measurements of the peak seventy years earlier, proclaimed the mountain unclimbable. Whymper made many attempts over the next four years, most of them in the company of Jean-Antoine Carrel, a highlander from Valtournenche, an Italian village located on the opposite side of the mountain. They intended to try their luck again in 1865, but Carrel had a last-minute change of plans and decided to make the first ascent with his countrymen from the Club Alpino Italiano. The persistent Englishman had no intention of backing down, however, and set out for Zermatt.

Along with Whymper, the hastily assembled team included his eighteen-year-old compatriot Lord Francis Douglas, the Anglical chaplain Charles Hudson, the nineteen-year-old Robert Hadow, and three guides: Michel Croz, a native
of Chamonix, and two Zermatt locals, Peter Taugwalder and his son, also named Peter. The entire group ascended the summit on July 14, 1865, around 1.40pm. Hearing their loud cries, Carrel, who had been climbing up from the Italian side, turned back. The conquerors of the Matterhorn began their descent. At one point Hadow slipped. As he slid down the slope, he knocked down Croz, who was leading the expedition, and pulled the rest of the team down with him. The taut line with which they were tied together snapped under the sudden load. Whymper and the Taugwalders remained on the ridge, while their four companions fell to their deaths. The subsequent court hearing failed to determine who had been responsible for the tragic events, nor did it stop the wave of speculation. Some blamed the Taugwalders for using an insufficiently thick rope. Others maintained that the two had no choice because the thicker rope had been cut by Whymper himself in order to allow him to ascend the peak first.

Today, 150 years later, the mountain continues to tempt adventurers. The most popular route, which leads along the Hörnli ridge – the same one climbed by Whymper – sees crowds of mountaineers in the summer season. With its crumbly rock, high exposure, and easily missed route, the mountain is a place where accidents – some of them fatal – still happen. To reduce the traffic somewhat, authorities have limited the number of beds at the Hörnli Hut and have banned tent camping in its vicinity.
Though skiing is possible year-round on the nearby glaciers, peak season in Zermatt comes in the winter. With miles of excellently maintained ski routes – one of which is 25 kilometers long – the area is very popular with skiers and snowboarders. Over the course of just a few days, the population of the town can swell from 5,000 permanent residents to as much as 40,000, as often happens after Christmas. This can result in such problems as increased waste production and water use. The latter, fortunately enough, is plentiful in Zermatt, which was even known as “Prato Borni” (“meadow among springs”) up until the 18th century. There are 96 springs in the area, along with fifty lakes and ponds, making the town self-sufficient. Mineral water at a temperature just above freezing is pumped straight to the taps. The locals claim that it’s healthier, more refreshing and tastier than bottled water. But that’s something you’ll have to see for yourself. 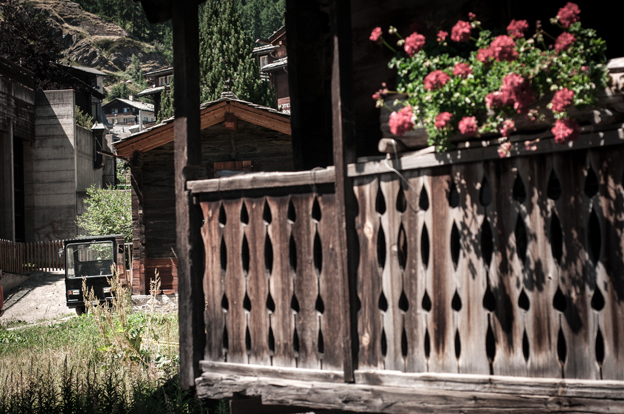